Looking to spread the word about the work that we do? Download Resources here.

Give a Dog a Bone… and an animal a home’ is a small, unique and award-winning charity that helps the over 60’s to afford a rescue pet companion – tackling loneliness in our ageing years and the rising number of animals experiencing homelessness.

The charity was founded by Louise Russell in November 2013.

Since then the charity has helped more than 300 animals – and their owners – find a brighter future, together.

Louise’s work has not gone unnoticed.  In 2015, she was awarded the Prime Minister’s Point of Light Award and in October 2016, she won the International Fund for Animal Welfare’s ‘Community Award’ for her work bringing rescue animals and the over 60s together!

Louise was selected as a finalist,  from thousands of nominations, in the Pet Plan and ADCH Animal Charity Awards.

As we enter into our 5th financial year, we have big plans around the charity, it’s growth and how we can reach more people, and rescue animals, who need our help!!

The story so far…

Recent statistics published by Age UK highlight a concern that older people can regularly go up to one month without speaking to anyone.

As so many elderly individuals live alone, a pet can be an important source of company and affection. They also provide routine, encourage exercise and can give someone a sense of purpose.

102,363 dogs were handled by UK Council Shelters in one year.

1 dog every 2 hours was put to sleep by UK Local Authorities during this time.

If finances are a barrier to adopting a pet companion, we can:

We also support those in the same age group who already have a pet companion but are now struggling to afford them, by providing them with similar financial assistance.

We are constantly helping to support shelters by linking them up with prospective new owners and homes for their animals.

Additionally, when the charity has been asked for special support we have provided additional help:

“Chico truly is a wee gem – he’s doing me so much good!  Can’t tell you how he has lifted my mood.  My energy and I’m just smiling lots more!

I don’t feel the house so quiet or lonely…”

Josephine, 65-year-old lady helped by Give A Dog A Bone.

“Each time we commit to supporting an animal with the cost of pet food each month, we commit to thousands of pounds per animal over their life time.” 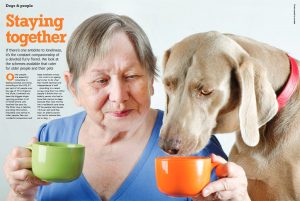