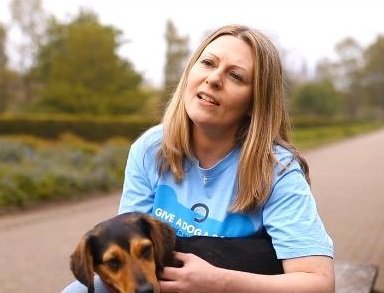 ‘Give a Dog a Bone… and an animal a home’ gained charitable status on 20 November 2013.

The charitable proposition is this: if you are 60+, and finance is a genuine barrier to rehoming a rescue pet companion, the charity can pay the rehoming fee and, if need be, continue to support on a monthly basis.

The aim of the charity is to support individuals through loneliness and animals through homelessness – providing companionship for the human and a much needed home for the animal.

Tackling two of society’s problems – not just one…

For every animal the charity commits to supporting, each month, it commits to thousands of pounds over that animal’s lifetime because – for those with a genuine need – we provide a regular monthly contribution towards the cost of maintaining their pet.

Some people choose to feed their animal with this contribution, others pay pet insurance and some save it up for unexpected vet bills…

Over and above the financial support, the charity has become known as a ‘go to’ place for animals whose owners may have died, or who are terminally ill, and who are worried about what might happen to their beloved pets when they are no longer around.

Since the charity’s inception, many loving homes have been found for animals who find themselves in this unfortunate situation.

The charity was founded by Louise Russell – a working Mum, who runs the charity in her spare time.

Louise manages the charity and provides the overall service to all who approach the charity looking for help.

In just over three years, Louise has been involved in 150 success stories – involving both animals in need and their older human companions.

This equates to approximately one success, per week, for the charity!

In Year 3, the charity’s cost grew by approximately 72%, whilst the charity’s income grew by just 11%, when compared to Year 2 figures.

It’s not hard to understand why – with a growing awareness of the charity, and how it can help, there was an increase in charitable activity – paying adoption fees, pet food bills, vet bills for the over 60s who couldn’t afford them and money was sent to help animals in emergency welfare situations.

In Quarter 3, it was quickly identified that the charity had more money going out than it had coming in, and immediate steps were put in place to rectify this situation – such as setting up our weekly bonus ball scheme and a push to increase regular monthly donators, amongst other fundraising activities.

At close of year 2, the charity had a total of 28 individuals who donated on a monthly basis – each donating somewhere between £2 and £15 per month.

At the close of year 3, a total of 55 individuals donated on a monthly basis. These donations directly pay for the charity’s pet food bill, each month. On top of this, a further 59 individuals pay a regular monthly donation to take part in our Lottery syndicate.

We continue to rely completely on donations and fundraising events, as the charity does not receive any support from the Government and is not in receipt of any form of grants.

In October 2016, Louise won the International Fund for Animal Welfare’s ‘Community Award’ which was presented in the House of Lords, this attracted various momentum in the media, the highlight of which was featuring in STV news on Sunday.

Year 3 saw the charity feature in several newspapers, magazines and TV programmes, however, much still has to be done in terms of profile raising for the charity across the UK and we welcome new opportunities to promote our aims.

Facebook continues to be key to our growth, as it has allowed us to reach the maximum audience, with very limited resource.

To date, we have reached 13,500 organic followers on Facebook and Facebook is where we gain the majority of our support and where most people first learn about the charity’s existence.

That said, we now have a promotional video which was tailor-made and gifted to the charity and a brand new website – so we hope to attract new support, with new methods.

In Year 3, we have conducted several talks in schools, promoting the charity and highlighting the plight of loneliness and isolation in our ageing years, and how rescue animals can help.

As we progress into Year 4, our aim is to continue to improve our existing offering, whilst striving to make more of an impact in the community.