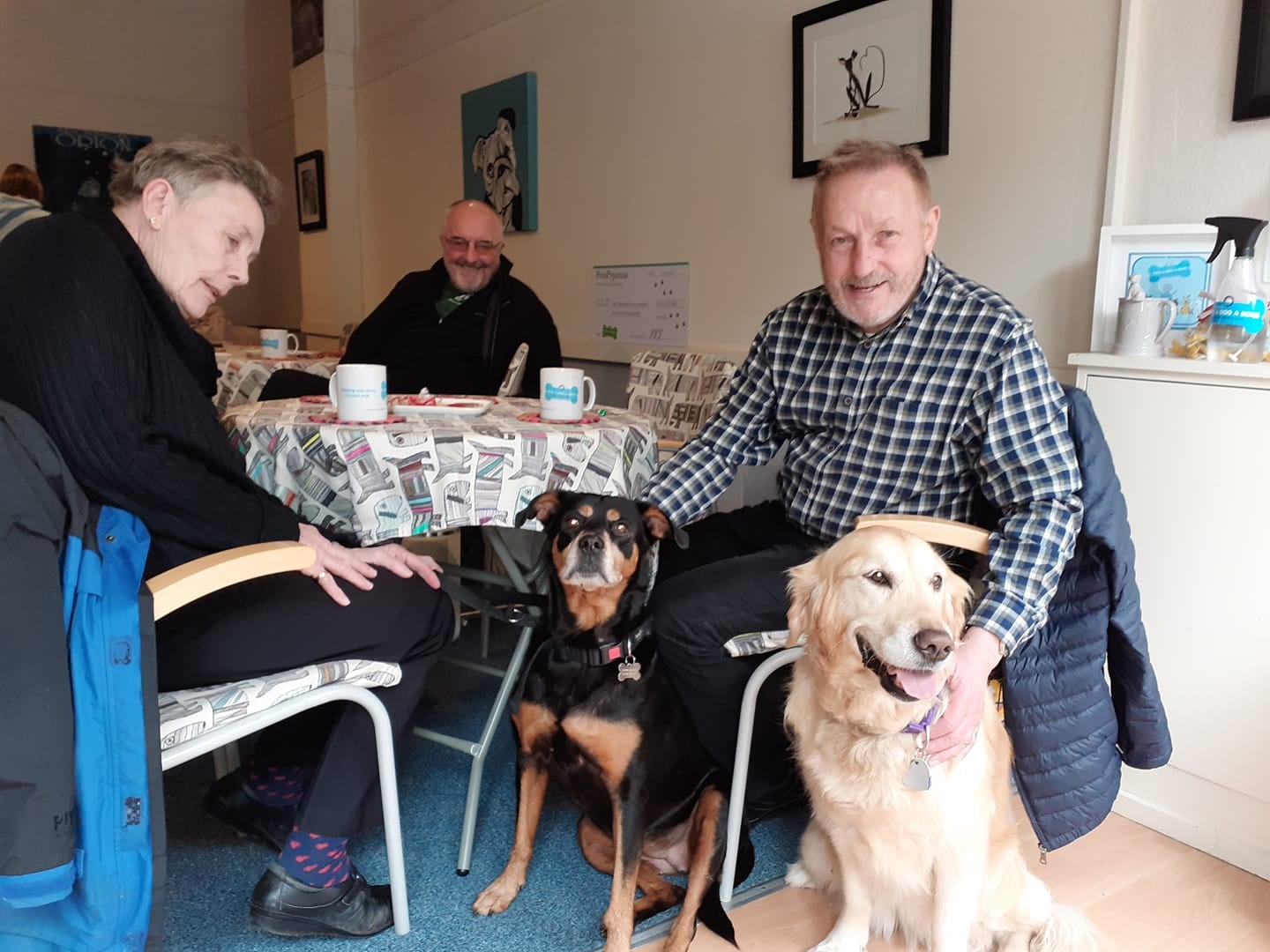 ‘Give a Dog a Bone… and an animal a home’ gained charitable status on 20 November 2013.

The aim of the charity is to tackle loneliness for older adults via animal companionship.

We operate two main projects in order to achieve this aim:

The first is our original, long standing, project where we support the over 60s to afford a rescue pet companion – it’s a WIN/WIN – the person gets a friend and the animal gets a home

The second project was launched in January 2018, called Companionship in the Community – a community-based project, providing a safe space for older adults to make new friends, learn new skills and mix with dogs!

Project number 1 allows older adults, who would love an animal companion – but are worried about the costs involved – financial assistance to adopt a pet.

Project number 2 recognises that many older adults love animals but, for whatever reason, do not (or cannot) have their own pet.  Our community space project offers the opportunity to mix with our special team of Companionship Dogs – without the pressure of taking a dog home!

Over the years we have helped thousands of older adults to have a more engaged existence with both peers and animals alike, and have won several awards for our unique charitable offering.

We are very proud of our services and the fact our offering continues to diversify to support those who need us most.

The following statement is based on our seventh financial year to date, commencing 01 December 2019 and ending 30 November 2020.

Year 7 started off with very high hopes – in fact, our closing words in the previous year’s Trustee Report were:

‘Here’s to Year 7 and all the hard work and miracles it will hold!!’

We were, indeed, in high spirits, fresh on the waves of winning £50,000 from Ecclesiastical Insurance.  Giving us the finances to look for a third Community Space – something we could never have afforded without their cash injection!

After a long search, it was decided that Alloa would be the lucky area to receive a GADAB community space

It took a while to find the perfect building – there were a few disappointments along the way and we had almost given up hope of finding the right space in Alloa – but, then, everything fell into place and we were offered a fantastic rate on a beautiful building, by a Landlord whose wife was a long term supporter of the charity and wanted to help!!

No. 15 Mar Street is an old, large, building, which was largely unused and in need of lots of TLC when we first viewed it, but, we had been given such a fantastic deal that we knew we just had to roll up our sleeves and make it beautiful again!

And we did make it beautiful again – by investing some of the Ecclesiastical funding to bring the building back to life and then we set to work letting let the Alloa community know that we would be opening the doors on 2 March 2020!!

Little did we know then, that a Global Pandemic was about to strike…

On Tuesday 17 March – just 12 working days after opening our Alloa community space – we were forced to close the doors to all three of our Community Spaces.

This caused huge concern for us, as the rug had been pulled from under both of our two main projects.

Project number 1 – all rescues centres were now closed and so it was impossible for us to support older adults to adopt a pet companion.  One glimmering hope was that we were still able to operate our monthly support scheme – providing monthly financial support to older adults to feed and/or insure their pets.

Project number 2 – we had to close the doors to our community spaces, further isolating those who needed us for support.

The main challenges that the charity now faced were –

Who are we now?

How do we remain relevant?; and

How do we continue to support those who need it?

We also faced financial concerns – we did not know what impact the pandemic would have for us as a charity as we were no longer receiving donations in community spaces, supporters were no longer able to fundraise in a traditional way and most large fundraising events had been cancelled!

Thankfully we received some signs of hope within a very short space of time – the first was that we had won £10,000 from the Sun newspaper as part of their 100 year birthday celebrations and the second was that we were awarded £30,000, over a three year period, towards our animal welfare project by RS MacDonald.

As part of the package RS MacDonald offered further support to the charity, by providing the opportunity for our Chief Executive to enrol in leadership development with the School of Social Entrepreneurs.

This took some of the immediate financial pressures away and allowed staff to relocate to a home base and look for ways to continue to support older adults and animals alike.

Thankfully, the previous financial year, we had invested in a CRM system, which allowed us to hold the contact details for all over 60s who had previously used our services.

With the database information we had gathered, we now had the means to keep in touch with older adults at home, and, within a week, we had mobilised our small team of staff to launch a new project called The Sunshine Project!

The Sunshine Project was our outreach solution during the lockdown period – it consisted of weekly ‘Sunshine Calls’ to older adults and surprise gifts in the post called ‘Sunshine Packs’.

The Sunshine calls were a real life line for people stuck at home and the Sunshine Packs were filled with feel good items including home-made crafts, letters from children, chocolates and luxury soap items.

We looked at this project as an opportunity to bring sunshine into the lives of older adults, as they faced an unprecedented lock down period – often alone.

The feedback was amazing and we were assured that we were making a positive impact in people’s lives.

We thought this project may be short-lived but, as it turned out, 2020 was very much a stop/start year with our community spaces opening and then closing again several times.

In fact, out of a potential 142 weeks the community spaces could have been opened, we were opened just 53 weeks – which equates to roughly a third of our opening potential in the year 2020.

As a result, we sought additional funding to continue our Sunshine Project – the lockdown period gifted us with plenty of time to write funding applications, which proved very successful for us and we were able to continue, and expand, our lockdown offering.

Most notably, as well as Sunshine Calls and Sunshine Packs, we started to offer free Zoom activities to the over 60s.  These were extremely well received and, because Zoom can be accessed anywhere, for the first time ever – we were able to offer our free activities to older adults outwith the areas in which our community spaces operated.

We’re so pleased to say we now have attendees from all over Scotland, England and Ireland too.

It’s not all been positive though –

Our animal welfare project has been significantly affected by the pandemic.  A large percentage of the working population now work from home and, people of all ages now appreciate the benefit of a simple dog walk.  This means that demand for dogs has never been higher.

Puppy prices have risen and more people are in the market for rescue animals.

This increase in demand and the fact that rescue operations are not operating normally, along with strict travel restrictions, all result in it being very difficult to adopt a rescue animal – particularly dogs – at this time.

This means that our financial support to adopt a pet – where we pay the initial rehoming fee, has taken a considerable dip this year.  That being said, we spent in the region of £16,500 on animal welfare in Year 7 – mostly a result of our monthly support scheme to help older adults to feed/insure their pets.

Our charitable proposition has always been to support the over 60s to afford a rescue pet companion – and, in normal times, we were usually able to help them find a pet too – but this is proving almost impossible in these strange times.

At the outset, we tried very hard to continue to support older adults to find a rescue pet – and were successful to a certain extent – but the wave of enquiries soon overwhelmed, not only our limited resource capabilities, but also the reality of the number of dogs available during a pandemic.

2020 was a very strange year and we were hampered in many ways but, conversely, 2020 became our most successful financial year to date.

In Year 7, we almost doubled the income we achieved in the previous financial year.

Our successful financial performance was a direct result of several individual reasons:

We have a clear focus for the year ahead – our costs are anticipated to be over £200,000 which will require a continual effort around fundraising, grant applications and attracting new corporate partnerships.

We are extremely proud of the way we adapted as a charity during unprecedented times.  The feedback we have received from our older adult beneficiaries gives us confidence that our response was very effective.

We will leave you with these words from Margaret – aged 63

“It’s a big step to walk into somewhere new, not knowing what to expect.  I was made to feel welcome, and normal, from the start.

During lockdown someone from GADAB has phoned me every single week.  They are the only people I speak to on the phone.  I can’t tell you how buoyed up I feel after a conversation with one of the girls – me, who doesn’t need anyone!!!! Oh – and I got a lovely card and a gift one day – a Sunshine Pack – it was lovely.

So, GADAB doesn’t just talk the talk, they walk the walk.  They actually care enough to keep in contact, and make that contact weekly, without fail.

They are opening me up to the pleasures of ‘ordinary’ human contact again.  They are making me know myself.

And dogs!  I’ve even started buying treats for the dog next door.”