Give a Dog a Bone community hub reopens in Alloa 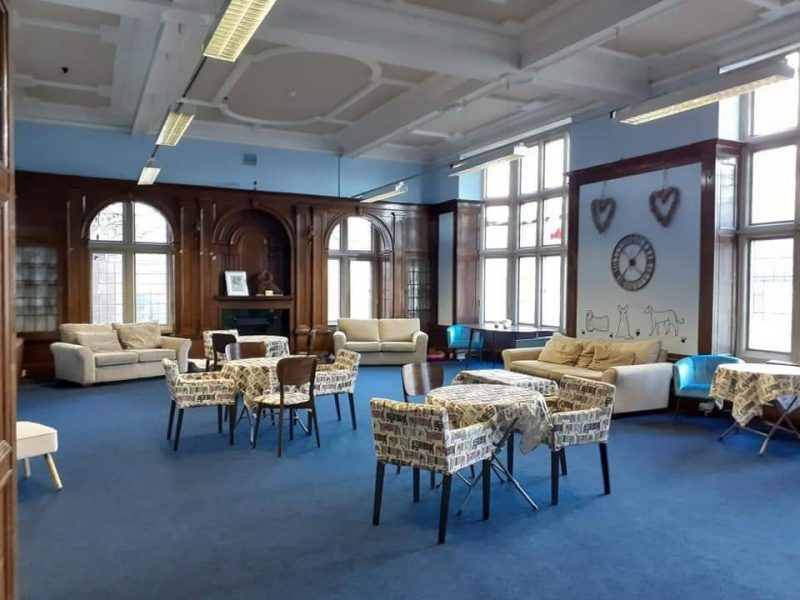 A charity which tackles loneliness and isolation in the community is reopening its doors in Alloa later this month.

Give a Dog a Bone held its grand opening at the old Liberal Club building in Mar Street on March 2 and proved popular with locals before closing due to the Covid-19 crisis.

The initiative, which offers a safe space for older people to make new friends, have a chat and mix with dogs, will reopen on Tuesday October 27 at 11am and anyone is welcome to drop in.

The award-winning charity is run by Louise Russell and provides animal companionship for the over 60s, at home and in the community, to help combat loneliness.

Louise said: “We’re looking forward to reopening our Alloa community space and welcoming anyone who wants to come along for a cup of tea, a chat and to stroke the dogs belonging to our staff and volunteers.

“It’s more important than ever that we tackle the loneliness and isolation which so many will have experienced during lockdown – so we’re here for the people of Alloa and the Hillfoots who want a change of scene and to meet others.

“We’ve carried out all the appropriate risk assessments and are lucky to have a lovely big space which allows for easy physical distancing – plus a therapy room where we can offer free reflexology treatments to the over 60s.”

Give a Dog a Bone was founded in 2013 and began by helping people aged 60+ to afford a rescue pet companion.

They apply for financial support from the charity, which can also link them with a rescue shelter, and end up with a companion while the animal – which could be a dog, cat or even a hen – is provided with a much-needed home.

The charity also launched a Companionship in the Community scheme with three community spaces – in Glasgow’s Shawlands, Troon and Alloa – offering people the chance to socialise and learn new skills through free activities like crafts and reflexology.

The large and airy social space runs over two floors, has a stairlift and features a huge wall mural plus paw prints directing visitors up the stairs.

It is operated by staff members Maree Anderson and Linsay McPhail, as well as volunteers, who bring along their dogs and whose ethos is to make people feel better by the time they leave than they did when they came in.

The team initially offered a range of free classes for over 60s, including chair yoga, reflexology and Spanish for beginners, however these have been put on hold for the time being.

Louise says: “At the moment it’s all about offering a friendly environment for people to come along and have a blether as well as a cup of tea or coffee and some biscuits and we are open to anyone of any age who wants to drop in.

“For our visitors who are over 60 we can only offer free reflexology sessions at the moment, but we will begin to open up more activities as the Covid-19 restrictions lift.

“So why not come along and see what we offer – we’d love to see everyone who visited before lockdown come back in again as well as meeting new people.”

The social space, based at 15, Mar Street, will be open Tuesdays to Fridays from 11am until 3pm beginning on Tuesday October 27.

For more information on Give a Dog a Bone and the services the charity provides call Louise on 07969 742858.