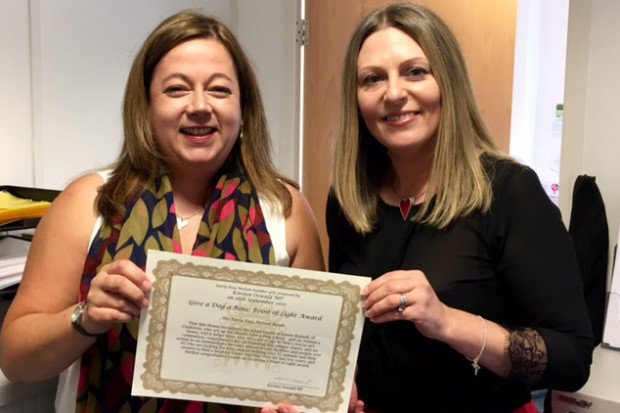 Kirsten, having been an early supporter of Louise’s charity work, was pleased to hear of the latest developments which have led to more than 140 animals being re-homed with elderly people who would benefit from living with an animal companion.

The charity makes this possible by funding the cost of the pet food, thus making owning a pet possible for everyone, without cost being a barrier.

“People like Louise make a significant difference to the lives of many people in our communities.

“This work has had well deserved recognition, including a “Point of Light” award from the former Prime Minister no less. Her love for animals and empathy for people facing difficult circumstances shines through what she does.

“I wish her every continued success in her endeavours”.

Louise Russell, founder of ‘Give a Dog a Bone’ said:

“Pets can have a positive effect on the well being of the elderly. We care about the rising number of animals in shelters and about loneliness in old age.

“Please get in touch if you know someone who is willing to bring a loving companion into their home.”

“I am grateful to have had Kirsten’s support from the very beginning when I set up the charity. With her continuing support I look forward to raising the profile of the charity, and to be able to do more for animals which need to be rehomed for whatever reason – into new homes with those who can offer them love.”

Article by John A. MacInnes at The Extra
Read more at: