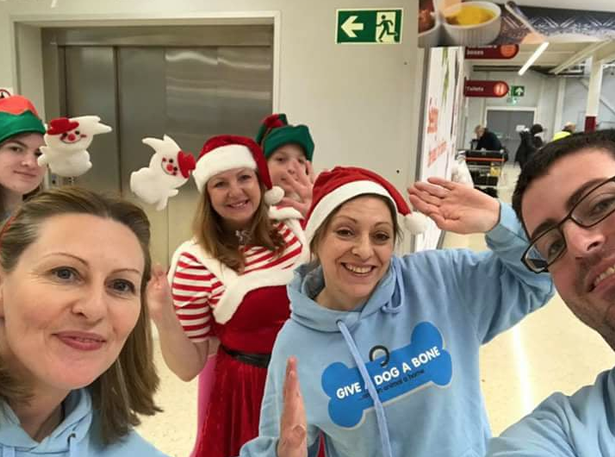 Give a Dog a Bone has carried out incredible work in the city and the new base will allow them to expand their operations.

The Glasgow charity which helps unite rescue dogs with elderly owners is opening a new permanent base in the south side of the city.

Give a Dog a Bone has been doing incredible work since first starting out in November 2013 and to date has found new homes for nearly 200 dogs.

The charity, which was founded by Louise Russell, also provides financial support for the new owners who in many cases are desperate for companionship but are worried about ‘having an extra mouth to feed.’

The charity moves into its first permanent base next month and as Louise explained the flit opens up a whole new world of opportunities, in terms of the work they can do.

“We want to literally open the door to people who love dogs but aren’t in a position to take on the responsibility of owning a dog full time,” said Louise. “This base will allow us to scratch that itch for them. “People can also come in with their own dogs to chat and meet and we are planning group dog walks and other events which will give them exercise and friendship. Everything we do will be free. People can pop in for free biscuits and tea and just say hello. “The charity just turned four a few weeks ago” she continued. “ Until now we have been a charity steeped in social media. What this gives us now is a permanent base and allows us to put a flag up in the community and try things out.

Give a Dog a Bone has enjoyed incredible successes in its first four years and the work carried out has seen Louise awarded the Prime Minister’s Point of Light Award and the International Fund for Animal Welfare’s ‘Community Award’. Among the new projects planned at their permanent home are a permanent a pet food bank for people who are struggling to feed their dog, sessions for seniors with an occupational therapist and yoga for seniors as well. They are also planning regular ‘meet the rescue’ events, where charities who have dogs up for adoption can bring them in.

“We specifically provide support to the over 60s, helping pay insurance, food and other costs for people who would love a pet but are worried about having another mouth to feed,” continued Louise. “Christmas and New Year is a hard time of year for some people. I spoke to an 82-year-old man just the other day who lost his collie a few months ago and said since then, ‘I’ve just been so incredibly lonely.’ “This unit gives us so much potential. It feels like we are now moving into phase two in the charity’s history. This is allowing us to expand our work. “The support we have had from people is pivotal to our charity. We’ve had incredible support from people with large followings on social media who have really championed our cause and got the word out about what we do. We seem to have captured a lot of hearts and minds.”

Give a Dog a Bone relies on your donations and needs your support to help run their new base in the south side when it opens next month.