In the Press: Dedicated volunteers given cash boost – thanks to Evening Times Community Chest Appeal 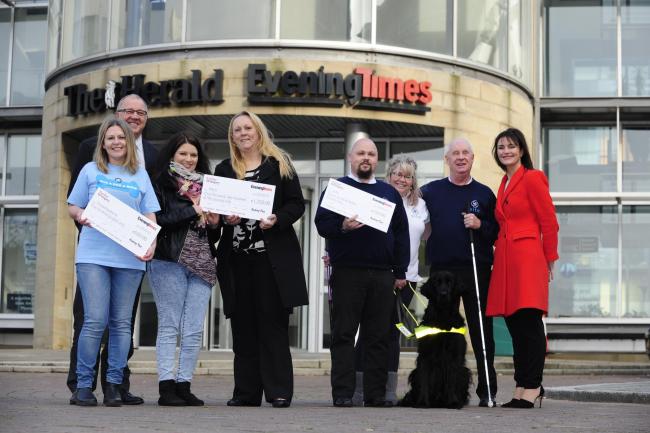 THREE dedicated community groups – working to improve the lives of vulnerable people in the city – have been given a well-earned cash boost.

Thanks to the Evening Times Community Chest appeal, the groups how have extra funds to continue their good work.

Charities SITE Scotland, PALS (Play and Learning Support) and Giveadogabone.net have been awarded a share of a £2,500 pot after being selected from over 70 entries.

The Evening Times and Taylor Wimpey teamed up for the third year to run the chest and asked people to nominate a local charity or deserving cause.

The top prize of £1,250 was awarded to charity Play and Learning Support (PALS).

Set up by mum Carrie Burns after she struggled to access groups for her disabled son, PALS is non-profit and provides activities for children aged three to 16 with special needs in Cumbernauld and surrounding area.

They now have 60 member families with more than 120 children who benefit from a range of activities including music class, teen scene, micro fitness and day trips.

Carrie said the group hope to use the money to pay for horse therapy and swimming sessions.

She told the Evening Times: “It is fantastic to win and we are so grateful for the donation.

“It can be very difficult for parents of disabled children to know where to turn.

“We make it easier for them to access activities for their children but also provide a support network for them too.”

The second prize of £750 was awarded to SITE Scotland – a small charity run by blind and partially sighted people, offering access to mobile devices such as tablets, computers, mobile phones.

With three members of staff and trained volunteers they are keen to host a group information event that could benefit 300 people, and offer one-to-one help to find out how to make mainstream products accessible to their needs.

“We want to use it to provide training for people with sight loss on how to use audio and video equipment.”

Taking the third prize of £500 was Giveadogabone.net.

The charity was started 18 months ago and aims to pair people aged over 60 with rescue animals – providing companionship for the people and a second chance for the animals.

It is a voluntary organisation and covers rehoming fees and the cost of pet food if need be.

In 20 months the charity has helped more than 70 animals – and their owners.

Founder Louise Russell said: “The donation will feed a cat or a dog for a year.”

Audrey Ross, sales and marketing director for Taylor Wimpey West Scotland said: “I would like to congratulate those who have won and commend them for the incredible work they do in the community.

“Reading through all the nominations it struck me just how much dedicated work is going on across the West of Scotland and I would like to thank everyone who took part.

“It was a very difficult task to select just three winners.”

She added: “These groups don’t always get the recognition that they deserve but we have been so inspired by them and their drive to make a difference to the lives of those who need it most.”